I know, I know, I sound a bit crazy…but I’m serious, I see it everywhere.

It all started with the awesome song by Prince called….yep, you guessed it…. ‘319’.

I didn’t think anything of it (except for it being a great track) until I starting noticing the numbers popping up from time to time.

I’d say, “Ha, it’s like the Prince song”, but that was it; just a coincidence.  However, over time I noticed it more and more.

I remember the time I first told my wife about this oddity. At the time she was still living in America (in Nevada to be precise) so the conversation was over Skype.  I was using my phone because the charger for my laptop had died.  There was a problem with the version of Skype on my phone which meant the video didn’t work so we were forced to speak the old fashioned way with just audio.

Just audio! Can you imagine?

What next? Drums and smoke signals?  Maybe we should just grunt and throw our poo at each other.

Anyway, as I was telling her about this number stalking me I could hear her tone of voice becoming that of someone slowly backing towards the door or reaching for pepper spray. I couldn’t blame her; I know how insane it sounds.

During this conversation I was also looking for my laptop because I needed to find out what the required voltage was so I could buy the correct replacement power cable.  It was then that I noticed the serial number on the back of my laptop.

I was actually mid conversation about this number and there it was, as clear as day. I felt like Hurley in ‘Lost’.

Is it just me or do others have this weird thing with numbers?

Am I seeing it because I want to see it?

I mean, I work in travel, so should I be concerned about this?

Surely others see 319 everywhere too, but they just don’t pay attention to it because, well, they have a life?  I see lots of numbers every day but that doesn’t mean they’re stalking me.

Am I going crazy?

Should I be taking medication?

Earlier this year I decided to have 319 incorporated into an existing tattoo I have on my shoulder.

When I told my tattooist and long term friend about it he was understanding (at least that’s what he said from the doorway whilst holding pepper spray).  I recall going home later that day and then something happened with 319 that made him say “Bloody hell, you’re right!”, but annoyingly I can’t remember what it was!

He was a bit freaked out. 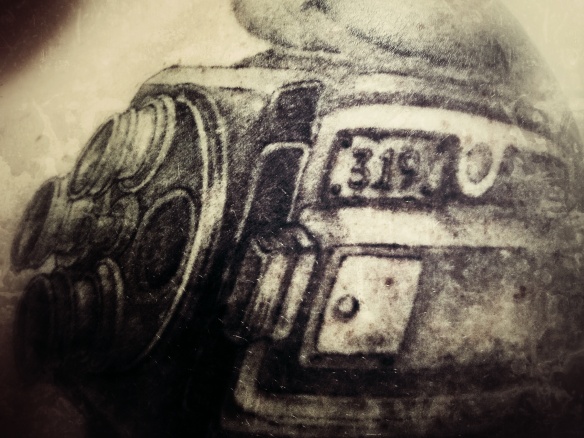 So why am I telling you about this now?

3 thoughts on “Are you being followed too?”