I am currently enjoying the pleasure of having a rodent of some kind scratching away in the loft every night, just above my bed. I’ve attempted laying humane traps to catch the little critter alive, but he’s just not interested in leaving.

Now the word ‘critter’ has changed to ‘fucker’ in my mind so I’ve resorted to poisoning the little shit.

Last night I braved the darkness of the loft to lay some trays of death out for dinner. Interestingly the packet described the little blue pellets as being made from whole wheat, which suggests to me that although it’ll kill the little bastard, at least we know it’ll be nutritional. It actually says the same thing on a box of cereal.

I rarely venture into the attic as it’s cold, dark, full of thick cobwebs like those experienced by Indiana Jones and has no floor. Well I say it has no floor; it has plenty of splinter-rich planks strewn across a maze of ceiling beams and insulation that resembles yellow candy floss. It also houses a dusty water tank that has to be negotiated, complete with various pipes, before you can actually get into the attic proper. My escapades went a little like this…

Reach up, remove the loft cover and bring the ladder down.
Climb the ladder.
Descend back down the ladder and get the torch.
Climb the ladder again.
Swear.
Descend the ladder one more time to get the poison.
Climb the ladder.
Clamber over the water pipes and under the roof beams like a cat burglar in a room full of lasers.
Have the belt loop on the back of my jeans catch on the roof beam by literally a millimetre, but enough to halt my progress.
Attempt to push through regardless.
Hear the material threaten to rip, so arch my back to dip under the beam and subsequently rub my t-shirt and face all over the dusty water tank in order to make it to the other side.
Get a splinter in my hand.
Swear again.
Clamber back over the water pipes to get the poison I left by the ladder. Belt loop catches again.
Another splinter.
Much swearing.
Cat burglar back across the pipes, not catching my belt loop this time, but severely dusting my front again.
Kneel down on the hard planks and pour the poison pellets into three little trays.
Freak out when a cobweb strokes my head and thrash out furiously at my face and hair like a madman.
Realise I don’t have enough light, so decide to go back down the ladder to get a lamp.
Belt loop catches again.
Run a long extension lead up to the loft, along with a bedside lamp, both of which snag on everything possible to impede my progress.
Remove the lampshade for better light, burning my splintered hand on the hot bulb.
Swear again.
The lamp falls over. I stand it back up.
Create a makeshift floor with splintered planks for the part of the loft I need to get to.
Crawl across the newly laid planks.
Crawl back to stand up the fallen lamp.
Crawl back out across the planks.
Realise I need more light.
Lean back to reach the torch which happens to be just out of reach behind a roof beam by literally an atom’s width.
Swear again, loudly.
Crawl back to get the torch and then back out to where I’m placing the trays.
Swear again.
Crawl back, pick up the trays.
Spill one of the trays all over the floor.
Another splinter.
Breathe gently.
Pick up the fallen lamp.
Crawl back out to where I need to be.
Place the trays amongst the cobwebs and dust, accompanied with the words “And fucking stay there you bastards!”
Make my way back to the ladder with the extension lead, hot lamp, lampshade, torch and box of poison.
Belt loop gets stuck on the roof beam.
Throw down all items in a mild rage.
Hot lamp bulb sticks to the plastic tarpaulin covering the water tank, causing the plastic to melt all over the bulb and creating an acrid burning plastic smell.
Everything (except the lamp) thrown down the loft hole and onto the landing below.
The extension cord tangles on the ladder.
Swear.
Climb down the ladder.
Climb back up the ladder to put the unopened sachet of poison back in the loft for the next time.
Climb back down the ladder.
Untangle the cord and burn hand on the hot lamp bulb.
Get the Dyson out to clean up the shattered lampshade. 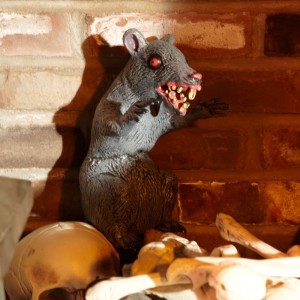