Regular readers of my blog will remember I once ranted about automated doors and their ability to hinder the actual act of opening a door.

For those new to my blog, or those with the memory of a man under investigation for allegedly having sex with a goat, you’ll find the entry here.

Following on from this, I had another choice encounter.

Last night as I left the office, I paused for a moment as I could feel that slight tickle in my bladder suggesting there was a piss in my very near future.  I was running late and, as it only takes about 20 minutes to get to Victoria station, I decided against draining the main vein until I was on the train home.

I could wait 20 minutes.

Fortunately, having walked for about 3 minutes towards the underground station, my tickle turned into a dull ache.  Having consumed a litre and a half of squash in the last 45 minutes of the day I knew my bladder was not going to be filling up slowly.

I‘m now not sure I could wait 20 minutes.

I negotiated the shuffling morons, ticket barriers, escalators, platforms, trains and countless cases, bags and bell-ends to make it to Victoria station; by which time my bladder was really starting to hurt.

I walked as fast as I could to the platform where my 12 carriage toilet would be waiting.  Unfortunately, ‘as fast as I could’ wasn’t very fast at all considering my bladder felt like it had swelled to the size of a small baby screaming for its mummy.  If the station hadn’t been so noisy I would’ve been reported to Child Services.

I made it to the last set of barriers and was held up by some dickhead with a suitcase who couldn’t activate the barrier with his ticket AND walk forward with his suitcase at the same time.  These skills appeared to be interchangeable, but not combinable.  Interestingly it was the opposite with my foot and his arse.

My bladder shouted at me to use a different barrier and we were through.  I walked to my platform like a wounded soldier on the battlefield and there in front of me was my train; my beautiful, beautiful train.  What a magnificent sight.  Tears were welling up in my eyes…at least I think they were tears.  Are tears yellow?

I was starting to feel a little nervous at this point because a single knock from an arm swinger or one of the countless idiots I commute with and I would’ve basically unleashed yellow hell in my trousers.

I desperately scanned each carriage as I ‘walked’ down the platform; slaloming the directionless cretins who had just vacated the very train I was boarding.

There!  A carriage with a toilet!

It was one of those automated toilets with the big curved door, but it would have to do.  I frantically pressed the ‘open door’ button as I was beginning to tremble and sweat urine.  The door started to rumble open at the speed of a tired sloth walking uphill through treacle whilst carrying a piano and wearing flippers.

As soon as the door had opened wide enough for me to fit through, I slipped inside.  For the uninitiated, there are three buttons inside the cubicle that read ‘open door’, ‘close door’ and ‘lock door’.  I pressed the button to close the door but it seemed the automated system hadn’t finished opening it and therefore I had to wait.

Finally the door finished opening and I pressed the button again to close it.  Well, I say ‘pressed’; it was more like ‘jabbed it 74 times in about 6 seconds’.  The door then started to trundle slowly shut.  It was slow.  I mean REALLY slow.

Who fucking designed this?  In fact, who fucking decided we needed an automated door on a toilet in the first place?  It only serves to slow us down at a time when we’re probably in a hurry, like running away from zombies, hiding from the ticket inspector or….dare I say….needing the fucking toilet!  Plus, being automated, we’re always left a little nervous that the door will suddenly and unexpectedly open of its own accord.  Not what any of us want to experience, or see.

Eventually the door came to rest and I pressed the ‘lock’ button whilst unsuccessfully attempting to open my fly.  I was shaking so much from the pain that I resembled a person with Parkinson’s disease trying to thread a needle.

Finally I managed to free the beast and I did indeed unleash yellow hell.

Without going into too much detail, it felt like I was pissing out my soul.  I could literally feel my body temperature drop and I believe I may have let out an “Oh yeah” at some point, but it’s unconfirmed.

As I’ve said before, I bet Captain Kirk didn’t have to put up with this shit whenever he wanted to use the toilet. 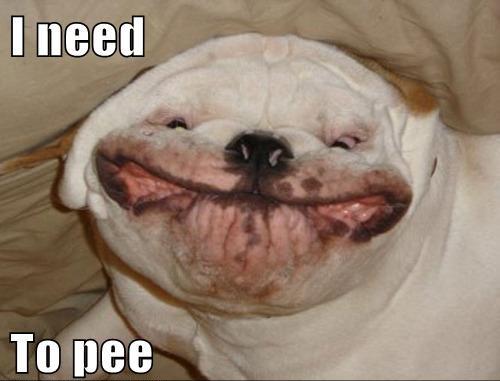