This morning I saw a man on the London Underground accompanied by his wife who was dressed in a Burka.

Some people unfairly assume that, being a Muslim, he is probably up to no good like bombing the train or something equally insane.

This is, of course, ridiculous. It is an irrational fear created by the few extremists out there ruining it for the rest.

I have to say that I disagree with the oppressive nature of the burka, despite the excellent UV protection it provides.  Having said that, I do have Muslim friends and my experience has taught me that their religion is no more or less peaceful than any other (except maybe Buddhism).

Also, this dude had his wife with him.  There isn’t a man alive (or dead) who wants to be greeted by 72 virgins with his wife!

Unless that’s their thing.

So I wasn’t worried.

However, this guy was wearing a T-shirt that wasn’t doing him any favours whatsoever.

There were some uncomfortably sweaty people on the train this morning. 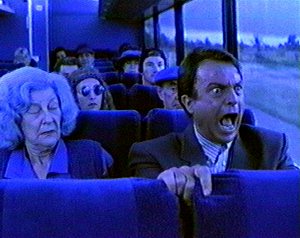 1 thought on “Getting your fear on track”