But let’s be honest here, I’m English; I don’t give a shit about Thanksgiving.

It’s not that I dislike it or anything, but it’s just not something that’s been in my life, like tampons.

It’s there, and I’ve seen it on TV a lot, but that’s for someone else to deal with.

Plus, my side of the family are a little over 5100 miles away in England so we wouldn’t have been together anyway, enjoying a holiday none of us celebrates based on something that never happened in the UK and is entirely America in origin.

You’ll be surprised how many people have asked me if we celebrate Thanksgiving in the UK.

(shakes head sadly at the state of the education system)

It also baffles me why Americans think we celebrate the 4th of July over there too.

I suppose, if they celebrate St. Patrick’s Day (Irish) and Halloween (Celtic), why wouldn’t we celebrate Independence Day?  After all, it’s a holiday that commemorates the United States’ independence from the British Empire. 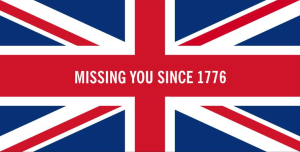 In fact, I think I’m supposed to be offended.

But I’m not, because I don’t care.

The only 4th I celebrate is Star Wars day in May.  The nerd in me loves the pun.

To be honest, I seriously believe that no-one here knows why they celebrate the 4th of July, only that it has something to do with Will Smith.

1 thought on “Thanksgiving…it’s not British don’t you know?”