One of the joys of living in America is the overabundance of rude and amusing things that are innocently said by well meaning people, that don’t mean the same thing as they do back in Britain.

Rather than simply smiling to myself and then telling my wife about it later, I’ve decided to put them in a series called ‘Innuendos, Double Entendres and Puns, Oh My!’.

This is the first entry (smirk) of many….I hope. I have another to share, which I will post shortly.

So, without further ado, let’s crack on:

I just walked past a female work colleague in the kitchen area, microwaving something that smelt [smelled] amazing.

Me: “Something smells good.”

This morning I came into work and one of the guys I work with asked me, “Hey, you know the word ‘Homie’; well, in England, do you say ‘Flatie’?”

He looked proper proud of himself.  I think he’d been rehearsing that question all morning to be honest.

Anyway, after I’d finished laughing like a corpse, the subject turned to my blog.  It seems one of my colleagues had been reading it and absolutely loves it1.  It was at this point that the joker (let’s call him Castro) asked if his awesome joke would make it onto my blog.

For clarity, Castro is a 6’5″ Black dude, built like a brick shithouse with the ability to punch me in half.

Yes Castro….(gulp)….your joke made it into my blog.

1 And who can blame her?

At lunch yesterday, a few of us went to a local eatery to spend time and catch up.

Anyway, one of our party was telling us how much she had drunk that night, concluding her tale with my favourite sentence of 2016 so far:

“I was forced to double fist.”

But the action of half choking on my drink, gasping for air and laughing like a busted lawnmower,  indicated to her that maybe…just maybe…I thought she meant something else.

Stuff like this doesn’t just make my day, it makes my hole weak.[1]

On the drive into work this morning I was behind this plumbing truck.

Yesterday my wife and I met some friends for a pub lunch.

On the menu they had a seafood dish called the ‘Fisherman’s Platter’.

I couldn’t help but mention that is sounded a lot like ‘Fisherman Splatter’.

At least they used the word ‘Fisherman’ and not ‘Seaman’.

This afternoon I read a group email sent out by one of the girls in the office asking for assistance with her clients as she is going to be absent over the next few days.

She then ended the email with, “If you guys could keep an eye out on these and process them for me I would be internally great full”.

This has appeared on a wall near work.

This is either an awesome piece of retro art, or a warning that they’re coming!

This makes me wonder; if Anakin Skywalker eats a meal that just isn’t filling enough, does that mean there’s Space In Vader? 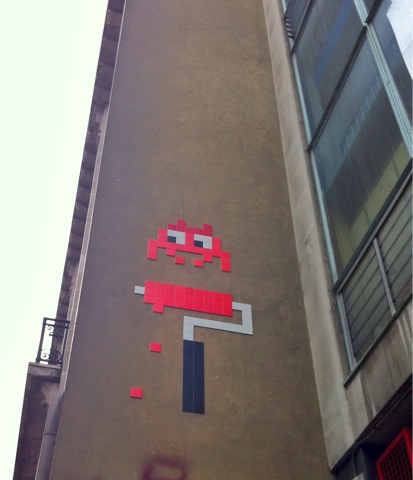